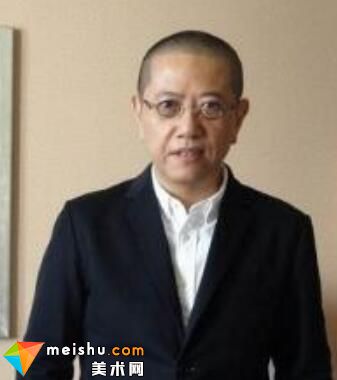 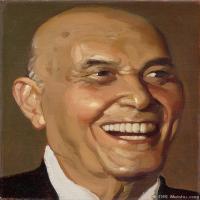 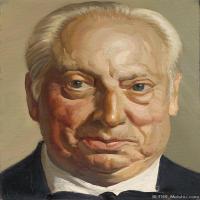 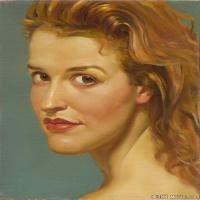 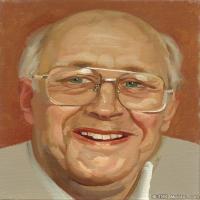 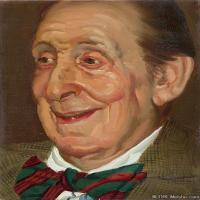 Exile youth
1970, 16 year old Chen Danqing junior high school graduation that was "Cultural Revolution" exile. The 16 year old children away from their loved ones, began to flounder Gannan and Subei conditions of rural chaduiluohu, Shanghai Hukou is almost a bolt from the blue. Chen Danqing was left fighting, painting, cricket, climbing roofs of Shanghai Shimen road old lane. Chen Danqing said, "that is a very desperate memory, I feel all black down. I grew up in a big city in Shanghai and then an oil lamp, the three of us were packed in a bed, and I remember waking up almost every night. A few pounds of mice, the whole night in our quilt to flee. The second day in the morning rain, the kind of rain hit the tile on the sound, very at a loss. And then come out a cigarette, looked at the nursery, the April rainy mountain, is desperate, the mind is empty."
The water is deep and the fire is hot
"Under the planting, bitter. While inserting, one side of the finger seam infiltration of blood, the mountains of the ground, is the sand. Stretched into the paddy field, the blood faded, continue to insert
Seedling. But planting back, mosquito net for the "Pushkin" look, great happiness. I'm working on the farm, the seedling plug Qi, will carry burden, I can pick one hundred pounds of millet, millet one hundred pounds heavier than the same weight things. Ten mountain is not indicated. How to go up the steps of the mountain, how to go down the steps, how to walk in the pond, how to go on the gravel, I will. Pick to the barn, golden barn, very beautiful. There are so many millet in the barn, I fall into the one hundred pounds, it is gone."
At the age of 20, Chen Danqing traveled to North Jiangpu and Shiqiao commune countryside. For nearly a year, squatting in the box of ashes painting village factory nearly 1000 urn. The mood is very depressed him, often with the old carpenter with pickles drink. At the age of 22, Chen Danqing has in six years, make every effort to strive for the stevedores to recruit the Nanjing commercial bureau places. The table was filled, the physical examination was passed, and the last minute was rejected. Because he was educated in Shanghai and recruited him for a number of Nanjing youth. He was lucky to squeeze in the car back to town to go alone, with heavy rain on the fever of a serious illness.
Gradually enter blissful circumstances
In the arts, Chen Danqing debut early. From 1970 to 1978 in the countryside during the life, extremely bad work, he has been
Insist on self-study painting. At the age of 20, was transferred to the Jiangxi press in comic classes, every day is very happy to draw comics, farming, and wanted to do a comic artist. In 1973, Chen Danqing had a "border line" "snow spring" three or four comic book; in 1974, was transferred to the province participated in the creation of oil painting classes, began painting revolution paintings, his first painting is "veteran and young". In 1974, Chen Danqing to 40 pieces of money to the family, from the Jiangxi mixed ticket to Shanghai, and then for the train to Beijing to watch the national art exhibition. The first time on Beijing like later to New York, to Paris, into the Chinese art museum is like walking into the Le Louvre Museum, a bubble all day, Lai in front of a few paintings. In 1975, Chen Danqing for the novel "blue stone" in the creation of illustrations. In March 1975, Chen Danqing went to the north at the time of his queue, painting and drawing skills have been quite solid, the works caused no small vibration in the Nanjing art scene. In 1976, Chen Danqing created a large oil painting, "Chairman Mao wrote to Chairman Mao".
The first time in Tibet
In 1976, Chen Danqing was seconded to Tibet as a talent to create, for the first time in tibet. Tibet has a decisive influence on Chen Danqing, one is that he found "a special theme of Cultural Revolution" -- the theme of ethnic minorities, but also laid the foundation for the later creation of Tibet in 1980 two "Tibet paintings"; the two is after the death of Mao Zedong can draw the tragedy, can draw people crying. Because of the "Cultural Revolution" can not be a tragedy of the scene, all workers and peasants have to laugh all the time. Therefore, large oil painting "harvest" Tian tears on Chen Danqing's early masterpiece "and" born into Tibet, and in 1977 were included in the "National Art Exhibition" Art Exhibition "in 1977 the creation of" army; comic "Zhou Enlai youth" in Tianjin; in 1978 should be "even pictorial" manuscripts "comic creation ring Vega's conduct". These works have a great influence at that time, Chen Danqing's reputation in the country is called "youth painter", and the Great Northern Wilderness youth artist group remoteshine.

Restore the truth
Look at the past "Tibet paintings" feel incredible, look at his 70s painting, feel is completely logical, natural thing, I even feel that he is more rational for painting charm, more vivid and beautiful. Chen Danqing in 70s most of the portrait, composition and creation, even from the "Cultural Revolution" or quasi revolution era, but little or no art during the Cultural Revolution "red, light, bright and poker-faced do do pose state. This makes me amazing, because this phenomenon is very rare at the time. He is relying on what do this, I is not clear. But in front of two that talent and sincere passion, should also be part of the reason. That he was painting, mainly produced in the instructions to meet the leadership. It comes from the inner artistic impulse, so that it is natural, and there is no more tool theory, style and concept. (Lang Shaojun art critic)
Chen Danqing's painting is love, is intriguing, with his superb realism, which reflect the rich flavor of life, never reached a position. (Feng Fasi painter, Professor)
In the face of the real art of Chen Danqing, you can't help but ask, "what are they thinking?"" "What do they need?" Even make you think further about the destiny of a person and nation. (Zhu Naizheng painter, Professor)
In the art circle, the summer of 1980, is a public hot season in Chen Danqing, in the Graduate Exhibition. He showed seven paintings depicting Tibetan life, with its compelling true image, its plain subtle flavor, deep cause of colleagues in the "art and life" reflection, exhibition Seminar on the "Tibet paintings" known as "realism" and "restore", and generally yes, he replied: "I don't want to put these pictures up to" larger than life "all sorts of" doctrine "to. I paint, just some men and women in front of ordinary life, from beginning to end......". This a tone of humility confession, it is after the painting "life stream" the creation of the earliest declaration. (Sun Jingbo painter, Professor)
Man dance line
In the summer of 1978, China Central Academy of Fine Arts graduate exam the creation of exam free proposition, one day in the. Chen Danqing morning drew four sketch sketch, the afternoon drew a painting of a composition in five different scenes, and many characters, the image of affection are very vivid and specific, like sweat not scattered on the occasion, he is living into his picture. So quick wit, such baseless creations image memory, really convincing, Dan won, for the examination of stories, he was only 24 years old, the age is the smallest in the oil painting professional candidates.
Chen Danqing preschool classes in the early beginning of the sketch painting. But in the sketch, is still the same. Chen Danqing's qualifications, in the "real" in the form of an object of insight; means of sensitive; in its accurate grasp and control skills, can be described as discerningly. In New York he sketches, more precise and concise style; style is more succinct, lively. His dynamic sketch, especially can make groundless accusations, is a must. The seemingly simple but rough, fine delicate to gigantic, vivid. On the sketch of the pure theory, with more independent value. This is the dance line, is a line of musical rhythm in hand Sonata symphony, revealing a unique Oriental painter inside root. Chen Danqing said: "the lines for me, is a kind of nature, the line form is sensitive to taste my instinct, I will have to sketch in national tradition", understanding of his artistic characteristics and origin, what is it very clear. (Sun Jingbo painter, Professor)

The painter's writer
As a writer, Chen Danqing, published a series of literary works: "New York day" in the "foreign" foreign music "excess material." the "back" and a dozen books. Content in society, culture, art, education, literature, people, history, music, architecture, gender, urban and so on. The 2005 issue of the "back" sold 100 thousand copies, has been printed nineteenth times; "excess material" in Beijing Sanlian Bookstore listed only a week, with sales of nearly a thousand copies of the charts; Chen Danqing's book was a bestseller in the first few, Hongkong in 2008 the most popular 50 book. The first is the "waste" in his, and Taiwan will also publish his book. Writing is another great influence on his paintings and speeches.
Chen Danqing once asked the reader, "why would you like to read my article?" Someone replied: "we have been depressed for too long." There are people answer: "look at your text is very cool." Chen Danqing, the charm of the text, from the part of nature, nature; the other part and his painting, to build a strong realistic skill based on. He has a talent for capturing and rendering details. The depth of human nature, cultural diversity, in his eyes, but there is a sense of daily details.
The pleasure of conflict
About painting and writing, Chen Danqing said: "a lot of feelings can not be put into the painting, because painting is a painting, it is said that another set of language. But writing can make me very good expression: such as New York and I'm not going to draw him, but I can write it, this is where the fun of writing. "New York day" as much as possible to describe a real, you can have a sense of breathing space, I just write this book by a New York resident, rather than a foreign artist, I don't think what animal called overseas artists."
"I have to admit, writing, speech, so I have never given the pleasure of painting, and when I painted shut up, and that painting than I can imagine happiness, happiness. People can not help but have outgoing or introverted nature, writing and drawing, is in the balance of nature, or is a kind of I do not yet understand the present conflict? And the effect of painting and writing is more different than I thought. The former is a pleasure, selfish, the latter seems to cater to the public, and was given an ambiguous responsibility."
"Painter of Chen Danqing" "writer Chen Danqing" "speaker of the Chen Danqing" Chen Danqing "critic""...... For the cross-border repeatedly, Chen Danqing temper increasingly keen eyesight and changeable strokes, the "back" "New York" "waste" that day Chen Danqing is good at thinking and good records, the accumulation of life in his body and writing more and more heavy and gloomy brewing.